Posted on January 13, 2013 by wrongunatlongon

The many criticisms of the IPL have recently pailed into insignificance by the shoddy show of the Caribbean T20 league, Australia’s bleak ‘Big Bash’ T20 and the impending implosion of the Bangladeshi Premier League.

As every proper cricket fan knows as fact, the IPL is based on a horrendous format which basically sees a handful of internationals stars like KP and Chris Gayle dressed in godawful tinfoil costumes cart mediocre Indian medium pace trundlers over short boundaries, sponsored by Bingo666, with a standard of fielding which makes my eyes bleed.

The Caribbean version got off to a suitably shit start when rain prevented a result in the opening game between Jamaica and Trinidad & Tobago. Judging by the fare on offer elsewhere since, Mother Nature did the sell out crowd a favour. Poor fielding, terrible pitches, an abominable competition which came 10 years after everyone elses. Although at least it has started, unlike the innovatively named ‘BPL’ which has seen the IPL’s issues with contract disputes and decided to magnify them tenfold, with players such as Alex Hales withdrawing as the grand total of ZERO of the international players lined up to take part in the competition have yet been given a contract – just a week or so before it begins!

The ‘Big Bash’ League managed to take one of the best things about Australian domestic cricket, the saturation of talent, and ruined it by doubling up in both Sydney and Melbourne. Quite why they didn’t contemplate involving a NZ side or two instead is baffling to an outsider. It did at least have international novelty stars like the once again excellent Muttiah Muralitharan once again outperforming Shane Warne. To be fair, Warney provided one of the few highlights of the tournament to date, throwing a ball at Marlon Samuels (who responded by flinging his bat nowhere in particular) and dropping the ‘F’ bomb live on air. It was cringeworthily car-crash TV; more Big Brother than Big Bash.

When considered, the spread and then decline of T20 is unsurprising. As a novelty sport, it was actually fantastic. Crowds sold out, it was great to see some innovation in technique, and opened up avenues for mediocre players like Graham Napier to get shout-outs in what was supposed to be a serious cricket blog. Once you get past the tinfoil though, things are less shiny. Even IPL viewing figures are down, and for decent reason. Seeing a six hit isn’t really that exciting when it happens all the time, the innovations have dried up, and cricket is still the same rather unpopular sport as it always has been, even if you squash it into a 3 hour window for those with lower concentration spans.

The talk of Test cricket dying is vastly exaggerated. We should really be worried about the health of global T20. Well, not worried exactly – Cricket will always be cricket; and so what if the hoi polloi don’t watch or even ‘get’ it?! 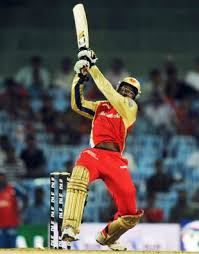 Chris Gayle heaving across the line and hitting the ball over a short boundary is, quite frankly, boring

I'll muse on various subjects, mainly involving willow, leather and grass. My natural instincts is to heap as many compound adjectives as I can to sporting natterings. If you like, then feel free to link :)
View all posts by wrongunatlongon →
This entry was posted in Miscellaneous Cricketing Thoughts and tagged bbl, bbl02, bpl, cricket, ct20, graham napier, IPL, murali, Test cricket, warne. Bookmark the permalink.

8 Responses to Big Up Bashes Won’t Break The Mould